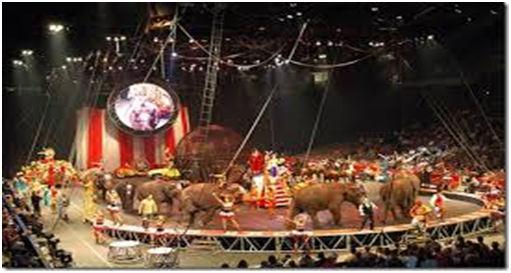 The idea of having a ‘Big Top’ for a circus originated in about 1825 with the shows staged by American J.Purdy Brown. The tents were originally fairly small with one ring and a few hundred seats and it is unknown why he chose to install it but it is an innovation that still stands to this day. Tents have seen a huge rise in popularity again in recent years with marquees being used for weddings, parties and music festivals. For Marquee hire in Kent, visit http://www.2intents.co.uk/.

Circuses are a fairly recent attraction but have their origins further back in history as the great Roman Amphitheaters testify. The Romans would delight in gladiatorial combat, chariot races and blood sports involving many animals. The Circus Maximus was the most spectacular of these and ran for more than 1000 years!

Acrobatics and juggling were recorded as being performed in Egypt as early as 2500 BC and the ancient Chinese also performed such acts for members of the imperial court. In the 11th century in England, William the Conqueror brought over rope dancers and contortionists from France. A large, organised and travelling circus that we know today was not really in existence yet though.

The modern circus came into being in England in 1768 when a former sergeant major, Philip Astley, decided to become a horse trick rider. He is also credited with adopting the 42 foot diameter ring that is still used in modern circuses. In 1770 he hired a clown, musicians and other performers and he eventually built a roof over his ring and added a stage.

The Big Top was introduced as circuses began to travel as opposed to remaining in one static location. However it was after WWII that the popularity of the circus began to decline. With the arrival of television, the tastes of the public were changing and becoming ever more sophisticated. From the 1960’s onwards, circuses faced growing criticism over their use of animals and so if the circus was to survive, it was going to need to adapt.

During the 1970’s the contemporary circus developed which placed a greater emphasis on performing arts, combining traditional circus skills with theatre. Focus is now much more about the performance looks, clever use of lighting and design and music. Animal acts are now faily uncommon sights. The most successful of these new circuses is the Cirque de Soleil, a Canadian company who have performed to nearly 900 million people in over 200 cities on five continents! The feats that wow spectators these days are more acrobatic, aerial stunts and of course the human cannonball!