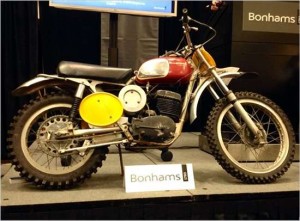 Every now and then famous motorcycles come up for auction, giving bikers the chance to own a piece of history. Assuming they have several thousand pounds to spare that is. But famous motorbike auctions can give us all a chance to re-live old memories and find out just what happened to those machines we used to drool over as kids.

A recent sale in Las Vegas saw Bonhams auction off some rare and famous motorcycles and related memorabilia. Unfortunately, many items went unsold, but it was still a great opportunity to see some important machines from history.

Among the lots was Steve McQueen’s Husqvarna, which was the same model as he used in the 1971 motocross movie On Any Sunday. It’s a memento of the legendary actor, who helped propel Husqvarna’s reputation with his endorsement of their machines.

Back in 2011, one of the world’s most famous motorbikes went under the hammer. The Triumph Trophy TR5, ridden by The Fonz in classic show Happy Days, was auctioned off after being bought by an enthusiast who had no clue about its history. It was originally supplied for the show by Hollywood stuntman Bud Eins, who was Steve McQueen’s body double in The Great Escape.

But when it comes to the ultimate motorbike auction, nothing tops the heavily-customised V-Rod owned by stuntman Evel Knievel which was auctioned off in the US. It was reported to be the only bike owned by Knievel when he died and had modifications including a raked windscreen with gold leaf flame highlights, saddlebags and an embroidered seat. It sold for $51,700.
And finally, a rare 1929 Grindlay-Peerless-JAP 500cc Hundred Model which won the Brooklands Gold Star award in 1937 was auctioned last October and sold for £67,580 as part of the Classic Motorcycle Mechanics Show. Two Brough Superior SS-80 motorcycles also sold at the event for more than £130,000.

This article was contributed by Holly Powell on behalf of The Biker Store – click here to check out the online store.