A trip to Alaska is a trip to be remembered and definitely for those who are always on the lookout for adventure, and a enjoy vast wilderness and the great outdoors. Motivational speakers such as Adventure Man www.adventureman.org would fit in well in Alaska! Alaska is a vast state and it is actually divided into five separate sub-sections – these are Arctic, Interior, South West, South Central and Inside Passage. Even within the regions themselves, the terrain can vary wildly – from lush green forests, to the arctic tundra, rolling snow-capped mountains to busy towns. Alaska is certainly an adventurers dream destination!

A visit to the inside passage region is a wildlife lovers dream. Marine life such as whales and sea-lions thrive here. It is also possible to see many parts of Alaska’s rich cultural heritage here. The totem poles of the Haida, Tlingit and Tsimshian Indians are still standing over their land. Alaska’s Russian settlers have also left their mark here, in the form of domed churches.

Alaska originally belonged to Russia until it was sold to America by the then cash-strapped Tsar in the 19th Century. This meant that the Diomede islands – in the middle of the Bering Strait were divided between the two countries – Russia kept Big Diomede and Little Diomede became property of the United States. Unfortunately, the Cold War saw many of the residents of Big Diomede moved onto the Russian mainland so that the island could be used by the Russian military and were split from family members on the smaller island. It is possible to visit little Diomede from Alaska, and a great opportunity to see a true remote settlement.

Another of Alaska’s greatest attractions are of course the Northern Lights. Visitors flock here for a glimpse of one of natures greatest spectacles of the sky. The best place to see them is in Alaska’s Arctic region, as it is closer to the North Pole (although there have been no Santa sightings recorded in the area!). 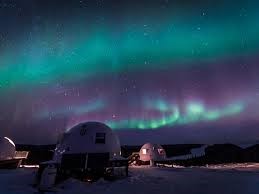 A visit to Utqiagvik on Alaska’s Northern coast gives you a real taste of the culture in the far north. Not much has changed here for hundreds of years and the traditional hunting practices are still going strong. A visit between November and January is an unusual experience, as the sun will not rise over the horizon during these months, meaning the town is always in the dark!