Bikram yoga, the name derived from the name its founder Bikram Choudhury is known as Hot Yoga as well. In coordination with a US based company he has developed this special type of yoga. His style of yoga has been derived from Hatha yoga. It is also called Hot yoga because the place where this is practiced and learnt is kept heated to a specific temperature. It is this high temperature that makes you body to work deep into the muscles, tendons and ligaments. The body goes into deep changes inside out. This yoga can be practiced by people of all ages in the guidance of a teacher.

Hatha yoga and Raja Yoga are the two branches of yoga that focus on the physical aspect of yoga. Both together also referred to as Astanga yoga. While Hatha yoga is mainly composed of asanas and physical postures, the Raja yoga uses the pranayama (breathing exercises) along with Bandha to rouse the body and prepare it for meditation. According to some traditions Hatha yoga is originally associated with Gorakhnath of the 10th / 11th century. But the oldest and the most comprehensive material related to Hatha yoga existing today is the Hatha Yoga Pradipika. Hatha Yoga Pradipika was given to the world by Yogi Swatmarama. Besides his own experiences Yogi Swatmarama derived this work from older Sanskrit texts on yoga. 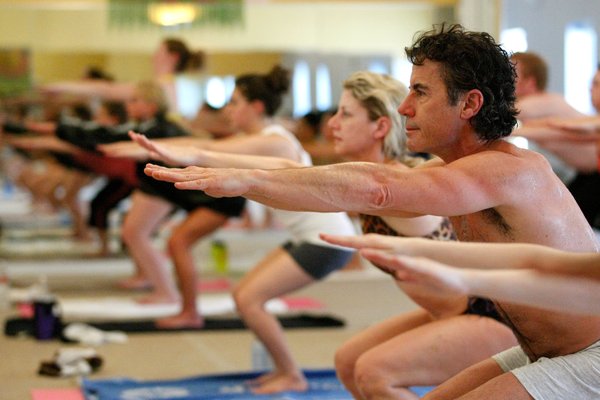 Being a part of Hatha yoga Bikram yoga believes in balancing the mind and the body thru physical exercises called asanas, control the breathing and calm the mind via relaxation and meditation. While the asanas increase the body’s physical health, meditation clears the mind thru enlightenment. Hatha follows the concept of opposing energies like hot and cold, positive and negative, fire and water etc.

Made of a series of 26 asanas i.e. postures Bikram yoga is said to maintain a specific sequence as designed by Bikram choudhury himself. Many trademarks related to Bikram yoga have also been registered by Choudhury. He is believed to have exclusive copyright of his yoga sequence. Although it is controversial in the United States because many communities there do not agree to the idea to an individual having any control over the series of postures that have been derived from traditional systems of practices. However Choudhury expects yoga instructors teaching Bikram yoga to have a license from him. In this, he does not include those individual practitioners who just perform Bikram yoga sequence (not involved in teaching) at home with the help of books or tapes or other wise.

According to Bikram Choudhury, Bikram yoga is not just a collection of 26 asanas and a couple of breathing exercises. It is the sequence and all it’s derivative forms. By improving blood circulation and reducing stress Bikram yoga increases flexibility to provide countless advantages.

The entire process of Bikram yoga, if followed properly and regularly, is said to have reduced many symptoms of certain chronic diseases. Is works as an excellent preventive system for parts of the body that are healthy? A regular follow-up would help your mind to focus better by controlling your breath. With a concentrated mind you can work harder and calmer. This improves the relationship between the body, mind and spirit.