In traditional western culture, a man’s wardrobe is more constrained than a woman’s but that doesn’t mean it is ‘simpler’. In fact, there are many important distinctions worth understanding so that you can make impeccable style decisions. The differences between Oxford shirts and other dress shirts is one. 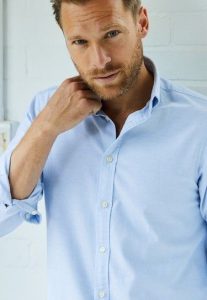 The dress shirt arose as a more relaxed alternative to traditional shirts with their long tails, tight tailoring, pleated fronts and stiff collars. They are roomier and more practical, sometimes even offering breast pockets and gave rise to the expression ‘white collar work’. Nevertheless, their origin was strongly linked with wealth, class and colonialism. Today, they are usually worn with a suit jacket or blazer and are perfectly appropriate for occasions like job interviews and functions.

Oxfords were designed in the late 19th century (along with the lesser known Cambridge, Harvard and Yale) as an update of the traditional dress shirt that would appeal to a more youthful clientele with aspirational tastes. The Oxford was a great success, but never fully supplanted older designs. Here is how to tell them apart. 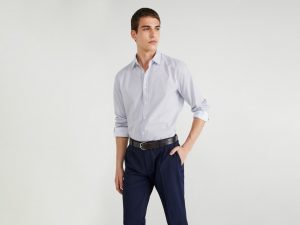 The first significant difference that sets the Oxford apart is its material. Dress shirts are made from tight weaves of various fabrics including linen, cotton, poplin and tweed. A genuine Oxford is made from Oxford cloth which combines a mixture of yarns in a basket weave that often makes the fabric look heavier. Oxfords also come in a wider variety of colours (even patterns) while dress shirts are soberer, and therefore more formal.

Their softer fabric led to many Oxfords acquiring button-down collars while dress shirts have stiffer point or spread collars. This obvious visual distinction tends to rule Oxfords out for black tie occasions but for most other formal outings the Oxford shirt is entirely acceptable.

Mens Ralph Lauren Oxford shirts are the brand most people are familiar with and sartorial outlets like EJ Menswear always carry an extensive range of Ralph Lauren shirts suitable for all occasions. However other names like Charles Tyrwhitt and T M Lewin have an equally impressive repertoire of both Oxford and non-Oxford dress shirts and should never be overlooked.

Both kinds, with their different weaves and collar styles, should happily co-exist in every wardrobe. They are interchangeable in many situations but still preserve clearly delineated roles at the more traditional and formal end of the sartorial scale.