Belt drives are used in many industrial applications. Basically, they consist of a loop of flexible material linking two rotating shafts or pulleys, and are mainly used to transfer power between the two shafts. 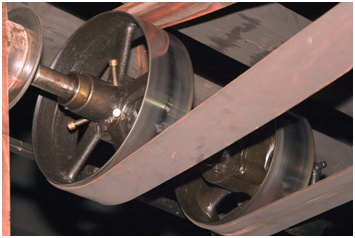 Examples of belt drives in everyday use are the conveyor belt – where the belt itself has been modified to hold and move weight – and the bicycle, where the power provided by pedalling is transferred by the chain to the wheels. A wide variety of belt drives are used today, but most can be considered as either flat or compound drives.

The kind of belt used depends on the type and purpose of the drive. Round rubber belts are used for light loads in machines such as vacuum cleaners and sewing machines. V belts such as the gates vee belts have a v-shaped cross section. The narrow bottom of the V sits in a groove on the pulley which prevents the belt from slipping, and as the load increases the belt is pulled more firmly into the groove.

V belts are currently the most commonly used kind of belt, and you will find them in engines, in air compressors and in both light and heavy industry. Other types of belt exist such as toothed, multi-ribbed and timing, and you’ll find a wide range are supplied by http://industrialbeltdrives.com/.

Flat belt drives consist of a belt linking two pulleys together to transmit power from one to the other. The shafts need to be parallel but can be of different sizes. This is very simple kind of belt drive which was developed and widely used in the 19th Century and which is still used today.

There are variations such as the crossed belt, where the belt is crossed between the two pulleys in a figure of eight shape and which means that the shafts route in opposite directions. There’s also the quarter turn belt, where the long axes of the shafts are at a right angle and a third pulley is used to “guide” the belt. These quarter turn belts are used for tangential power transmission.

Compound belt drives use multiple belts and pulleys, and the shafts are not always parallel to each other. These are more complex arrangements used to transmit power in any direction.